MPHI, or the Michigan Public Health Institute, is a non-profit institute dedicated to improving public health through the use of state-of-the-art community health practices. Laurie Taylor, Training and Development Manager, and Jane Boyden, Online Course Developer Level 3, have been using Lectora® as their authoring tool since February 2007. MPHI is also a CourseMill® customer.

When MPHI got Lectora Inspire 16 with Responsive Course Design™, Jane loved it. “I was like a kid in the candy store,” she said. “I had to force myself to go home at the end of the night.”

“I was like a kid in a candy store. I had to force myself to go home at the end of the night.” – Jane Boyden, MPHI, about their upgrade to Lectora 16 with Responsive Course Design

The State of Michigan had a series of prerecorded training webcasts that needed to be updated to add interactivity. The new eLearning course—“Building Healthy Communities”—needed to have more tracking capabilities than were available in a webcast, along with knowledge checks added. It also needed to be a mostly video-based course that was mobile-friendly.

The mobile aspect was essential because the course would be delivered to a wide audience, so learners would be using a variety of device types and sizes. “Building Healthy Communities” was training for State of Michigan employees—anyone working with public health-based community education. The purpose of this eLearning course was to increase people’s skills and knowledge on better working with communities and understanding what health equity is and how it impacts the communities they’re working with.

Laurie and Jane needed to take the old PowerPoint-based, narrated webcasts and convert everything up to a multimedia video-filled course that was mobile-friendly.

In addition, creating a mobile-friendly course was new to Laurie and Jane. “Before using Lectora 16 with the Responsive Course Design, the courses we created weren’t really mobile-friendly,” said Jane.

The 2 old webcasts were turned into 2 chapters that made up the new “Building Healthy Communities” course. The first module, Principles of Community Engagement, consists of 3 separate videos—and took under 5 months to complete. The second module, Heath Equity Basics, is 4 videos and was finished shortly after. Each video part of the course now has its own intro page, followed by the video, and then knowledge check questions. 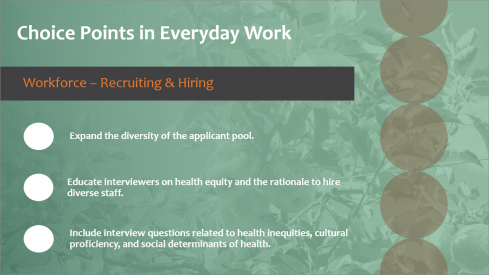 Above, an example from the Health Equity Basics module

Laurie’s team recorded the PowerPoint screen using Camtasia® (included with Lectora Inspire), and then fine-tuned it, adding audio, narration, and background music. “Camtasia is the go-to tool that we use for most of our video work,” Jane said.

Jane used the eLearning Brothers assets built into Lectora Inspire to rapidly create the new course. “The nice part about that is that they’re already laid out in Responsive Course Design,” she said. “That was helpful.”

She used PowerPoint as the background for each video and a matching eLearning Brothers template as a theme for the course. The template acted as a shell, which Jane modified to fit their needs. “We loved the look and feel, and we loved that we were able to use the recorded PowerPoint,” explained Jane. “They all partnered nicely together and looked really great.”

In addition, Jane and Laurie were asked to include knowledge checks in the training. Lectora made it easy for Jane to add simple multiple choice and true and false questions, reinforcing ideas that learners just watched in videos. “We’re really excited [Trivantis] came out with new radio buttons,” said Jane.

Having CourseMill as their learning management system improved the ease and quality of the course data that was tracked. “Before, with the webcast, there was no way to gauge who took it,” said Laurie. With CourseMill, they could get first and last names, completion times and status, and more important data.

Michigan Public Health Institute currently has 5 instances of CourseMill—all have the Advanced Reports. “I love it,” said Jane. “It makes it a lot easier come the first of the month to run the reports of the previous month.”

They’re even moving to the full version of ReviewLink™ starting October 1, 2016. “John Blackmon presented at the Lectora User Conference in May,” explained Laurie, “and he talked about the markup tools that were coming soon.” Another factor was that ReviewLink now offers 50 projects per license. “It’s a no brainer for us,” said Laurie. “We’re very excited.”

The State of Michigan saw a lot of benefits to converting this course and making it mobile friendly. Laurie said, “Users really wanted to be able to watch on mobile.” It was perfect timing that Responsive Course Design in Lectora was out, so Laurie and Jane could move in that direction.

Using Lectora, Jane and Laurie created a mobile-friendly, updated “Building Healthy Communities” course that was not only a success, but is also a great user experience. “By using responsive course design, we’re hoping to eliminate a lot of the help desk questions that we get… since they’re mobile-friendly,” said Laurie.

Because client satisfaction was so high—the State of Michigan loves the course and the way it looks—they intend to release the course nationally. Further, because learners who log in can access any course, Laurie and Jane believe that the success of “Building Healthy Communities” will inevitably lead to better completion rates and a higher number of views for the over 30 other courses available.

Because client satisfaction was so high—the State of Michigan loves the course and the way it looks—MPHI intends to release the course nationally. 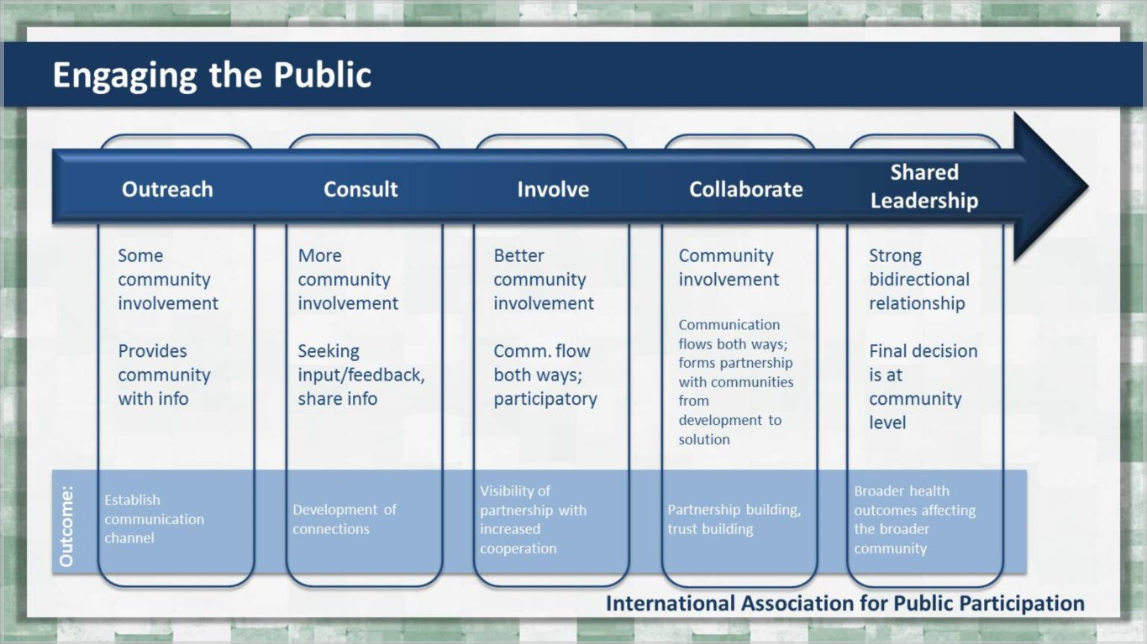 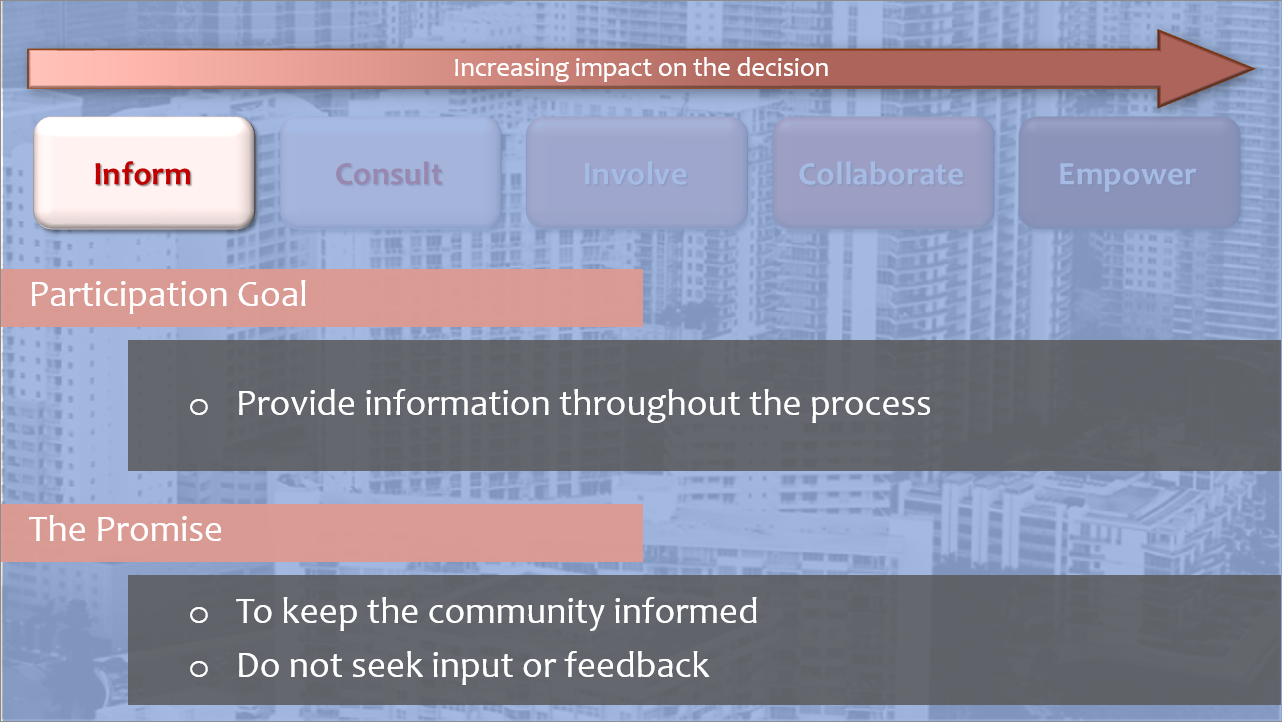 Questions about getting started? Drop us a line to find out more!

Send us an email to start chatting with an account rep.