The TORONTO 2015 Pan Am/Parapan Am Games Organizing Committee successfully trained more than 20,000 volunteers—and they used Lectora® Online and CourseMill® to do it. To get an idea of how the training turned out, below is a screenshot of their blended learning portal and its custom news page. 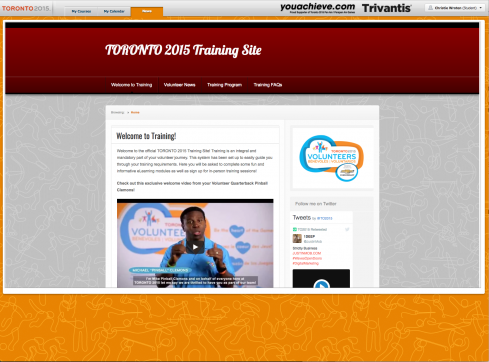 Let’s take a look at the case study to learn a little more about the TORONTO 2015 Games and how the committee tackled this huge training project.

In 2015, Toronto hosted the joint Pan Am/Parapan Am Games with close to 7,000 athletes from 41 countries across Latin America, South America, the Caribbean, and North America. 1.4 million spectators came to see the TORONTO 2015 Games in 36 Pan Am Sports and 15 Parapan Am sports.

The TORONTO 2015 Pan Am/Parapan Am Games Organizing Committee was responsible for planning, managing, and delivering the Toronto 2015 Games, which included training more than 20,000 volunteers and staff. The overall budget for TORONTO 2015 was about CAD $1.4 billion, so while putting on a major multi-sport Games of this size, they needed to make sure that resources were well managed and that the games stayed on budget.

The TORONTO 2015 Committee was looking for an authoring tool to build training modules and a learning management system (LMS) to deliver online training to the 20,000 volunteers and staff. In addition, the LMS would be used to track instructor-led training for about 100 physical locations within the Greater Golden Horseshoe of Southern Ontario, Canada—so TORONTO 2015 needed a blended learning portal for all the training.

Want to see the results, plus screenshots of the TORONTO 2015 CourseMill learning portal and training created in Lectora Online? Read the full case study for TORONTO 2015 Pan Am/Parapan Am Games.