The e-Learning world can seem like a jungle, full of different learning management systems competing for your attention. But what if it actually WERE a jungle? Would your LMS end up the predator… or the prey?

Grab some bug spray because we are headed to the jungle to find out! The African jungle is home to exotic parrots, antelope, leopards and more. Let’s take a look and see which characteristics would make your LMS prey.

Antelope—A species on the brink.
Many types of antelope are severely threatened by hunting and poaching, not to mention all their natural predators—kind of like a bottom tier LMS that can’t handle the competition. You want to have confidence that a strong support team backs your LMS and it’s not about to disappear like the Bluebuck antelope.
Cape buffalo—Slow and ugly.
As large and cumbersome as an outdated LMS, Cape buffalo are common prey for crocodiles and wildcats. They can usually be found grazing or wallowing in muddy water. They’re a little ugly, kind of like an outdated LMS provider that—in the words of e-Learning expert Craig Weiss—still thinks “that 1996 was a good year for design and wants to keep their system looking that way.” No one wants that from an LMS.

Mongoose—Can’t do his job.
Much like the LMS that promises you tons of cool new features that you later find out don’t work, a mongoose doesn’t always do what you expect. For example, mongooses were introduced to the Caribbean and Hawaiian islands in the 19th century to control rat and snake populations but instead caused many bird species to go extinct.

Predator LMS—this is where it’s at!

So we know what type of LMS you don’t want, but what predatory animal characteristics would give you an e-Learning advantage?

Leopards
Now, if your LMS is a leopard, you’re set. Leopards are one of the top predators in the jungle, which means they’re dominating all the other animals—and those competing LMSs. What makes leopards so fierce?

They’re adaptable.
Leopards are the smallest of the big cats within the genus Panthera (which includes lions, tigers and jaguars), but they’re also the most adaptable. Leopards can swim, climb, hunt and scavenge. How does this relate to an LMS? You want your LMS to be adaptable too, able to deliver and track many file types, including video, PDFs and SCORM content.

They make the most of their surroundings.
In different habitats around the world, leopards have evolved darker or paler markings for better camouflage in that area. Similarly, you want an LMS that can make the most of the technology available to it—including mobile!

They can purr!
Leopards may not roar as loudly as lions, but they can purr. And at the end of the day, don’t you want an LMS that’s easy to work with and doesn’t stress you out? There is nothing more relaxing than a purring cat. 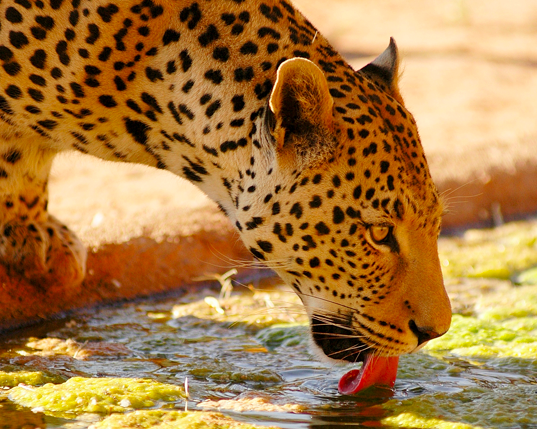 (Photo via the African Wildlife Foundation)

Here at Your Everything for e-Learning Place, we’re feeling ready to take on the e-Learning jungle. Why? Because we have CourseMill® LMS on our side, and much like those feline kings of the jungle, CourseMill is adaptable, advanced and ready for anything. To learn more about what’s coming in the next CourseMill release, email as at Info@Lectora.com.